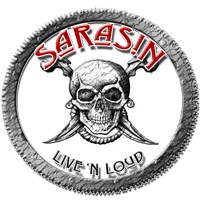 Forged in the steel mills of gritty Hamilton, Ontario, Sarasin has been satisfying the palette of “The Hammer’s” Metalheads for 30+ years. As visionaries, they recorded their 1st indie EP in the 1980’s long before other bands realized it was possible. However unlike the fame seeking “poser” bands of that era they did it quite simply for their fans. Fans who are loyal to this day and could care less about viral videos and “likes”.

Whether playing a dingy local bar or on the stage of a concert hall, the throttle is always fully open. Unpretentious persistence has kept this band driving forward with their heads down simply doing what they love, smashing their fans in the face with hard hitting, pulse driving Metal.

This most recent album was conceived when founding bass player Rob Grant fell ill and co-founding guitarist Greg Boileau wanted one last recording with him. Sadly Rob never got to play on it and lost his battle in 2012. It took some time but Greg, along with longtime members drummer Roger Banks, and vocalist Mike Wilson pushed ahead to finish the CD and have dedicated it to their brother, Rob.

In May 2015, the band signed a record deal with Pure Steel Records based out of Germany and the band’s goal for now is to promote the CD and resume playing shows in Canadian cities with the addition of veteran bassist, Les Wheeler. They will also be embarking on a European tour (where metal is still flourishing) for the summer of 2016.

In 2018, Sarasin chose to raise the bar and Raise The Pain. Veteran vocalist Fabian Bortolotto entered the Sarasin family and the creation of the next CD, Raise The Pain, began. In the spring of 2019, Sarasin gave the public a taste of their new creation and it has had an overwhelming response with a sold out show at the Hamilton Place Studio Theatre.

Sarasin is now what it wanted to always be …a driving force in metal music and continuing its legacy!!!

Born in Hamilton Ontario, Greg’s a founding member of Sarasin. He was a Q107 homegrown winner in 1988.

Also in his vast experience, Greg played guitar on tour with Brighton Rock from 1989-91.

He got his first guitar at 15 (Gibson SG) and has been playing Gibsons ever since. Mainly Les Pauls these days. His other gear on stage is a Marshall stack with both Mesa Boogie and Marshall heads.

Roger Banks has earned himself a well-deserved reputation behind the drum kit having recorded and toured with artists such as Billy Sheehan, Tony Levin, Mark St John and Jim Gilmour to name but a few.

Roger has performed on every continent on the planet and has recorded on over 40 CDs. Driving the music with energy and creating a unique approach to rhythm is a passion that is easy to hear in Roger’s performances.

Whether live or inthe studio, his mission is to play every song as if it is his last!

Born and raised in Hamilton, Ontario, Les began his bassist desire at the age of 13.

Playing clubs by the age of 15 with bands made up from schoolmates and friends, Les was exposed to the music industry at a young age.

By 19, Les was on the road across the country with the band, Manson. Les then played in various club bands as well as classical metal recording artists Mystique.

Playing off and on with various club acts, Les and his stage energy was welcomed into the Sarasin family.

Amplifiers are Peavey, Ampeg and Gallien-Krueger.

Fabian Co-wrote all the lyrics and vocal melodies on the 1988 Q107 winning tune Running Scared. Fabian first joined Sarasin back in 1986 recording their debut album Lay Down Your Guns in 1987.

Fabian moved on from Sarasin after a 5 year stretch of maddening fun to explore numerous musical and business ventures. Now after close to 30 years Fabian has rejoined the band and has been working diligently with the boys on their new album to be released in early 2019. He’s ecstatic and can’t wait to rock and scream ’til your ears bleed.